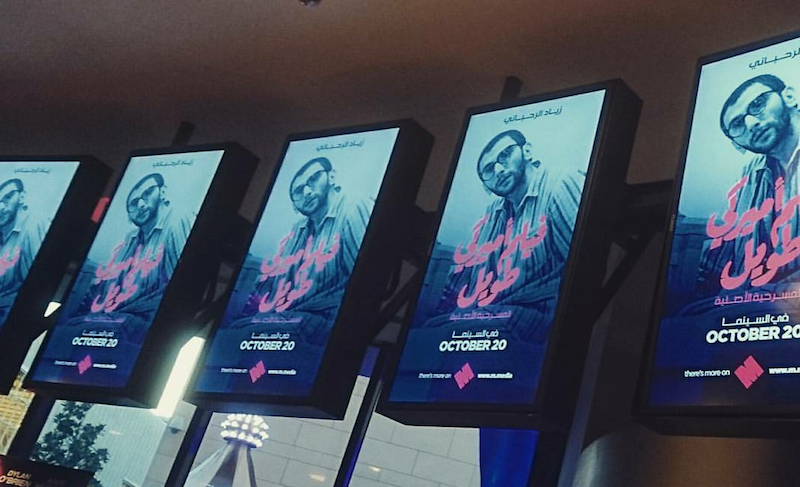 FILM AMERIKI TAWIL: ART THAT SPEAKS FOR ITSELF

I walk into Cinemacity for the avant-premiere of Ziad Rahbani’s Film Ameriki Tawil and I’m actually nervous.

I am invited by m.media, a brand new platform that aggregates films, series and docs in the Arabic language on low-fee, monthly subscription basis. Essentially, they are showcasing some of our best and bravest talents, from the past and the present, in one digital place. As part of the larger Quantum media, their team has gotten the rights, collected the only existing footage and audio of Ziad’s iconic play, and somehow pieced it together so I could see what my family has been talking about for decades.

Honestly, I’m nervous that I’ll be let down. Nervous that I would be at another event that is all show and no substance, in both the art itself and the way it was being presented.

And it just couldn’t happen with this play. Not this play.

After collecting my tickets on the red carpet, I head upstairs to the reception area. Another red carpet, only this time, with a backdrop, cameras, the press and stars giving interviews. It’s buzzing and exciting. When I look up, the video installation is made up of images from m.media’s films and series. Wait staff is serving drinks and insisting that you take a box of popcorn. Nice touch.

This is glamorous and real at the same time, not just the illusion or a cardboard cutout of fake-glamour.

So far so good!

Next, we are escorted to the theater where there was popcorn on each seat and a water bottle waiting for us. Again, nice touch. When the play on screen started, the feeling is one of inherited nostalgia. For the love of art, I have been hearing, “I watched this play when it opened in Hamra,” just as much as I have heard the recordings themselves.

And….
It was spectacular.

The amateur footage & audio pieced together from many performances was a feat of artistic strength. At some points, the audio would be hard to hear, or the image would be far too grainy, but not often, and anyway, it didn’t matter, Ziad’s play holds up.

There was a lot of money and a lot of work put into this, but those two things were used for class and elegance that respected a masterpiece.

And they didn’t let me down. Yes, it’s a business. Yes, they invested a lot of money in order to make money back, that’s what a business is. But when you’re in the business of art, the product carries more than just its monetary value.

Then it hit me. No matter what I do at fadein or how I contribute to Art through my writing (for the love and for the business of it), I know that the art must speak for itself. As long as we can operate under this mission, then we’ve respected each other and the craft.

Thanks m.media (and Ziad Rahbani) for the reminder.

The avant premiere of Film Ameriki Tawil was on 10 October and the official release to the public is on 20 October 2016. Go see it. Because it’s part of us. And check out m.media, because they get it.